Virtual Political Debates Set Up in Just 2 Weeks with Webex

The Georgia Primary Election debates were just 2 weeks away. The excitement and momentum were growing. Nerves and anxiety were rising. Georgia Public Broadcasting (GPB), in partnership with the Atlanta Press Club, was setting the stage for the debates like they have done every year for the past several years. Hundreds of questions were being prepared and thousands of people were marking their calendars.

And then within days, the world changed, forcing streets to close, people to separate and events to cancel.

Unlike some events, elections are not something that can be postponed or reconfigured for next year. GPB was stuck between a rock and a hard place. When looking for a solution, GPB didn’t want to merely “get by,” they wanted to exceed participants’ and viewers’ expectations.

They had to figure out how to host thousands of viewers, create an interactive environment, respect social distancing rules all virtually… while maintaining high security and control. 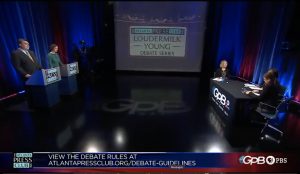 The Webex portfolio was able to check their boxes.

Cisco Meeting Server, Cisco’s on-premises deployment, provided GPB with a network that gave the host “white glove controls.” They needed extensive control over attendees to prevent disruptions and ensure no unauthorized parties interfered with the production.

Overall, the Webex platform delivered. The on-premises server issued them extra controls and protection over the broadcast. Webex Teams provided a simple, organic experience and call quality that simplified the experience for everyone. The Webex platform joined with the broadcasting systems to allow participant audio and video to integrate with other sources for the live television broadcast. Video was routed directly from the collaboration infrastructure to the production control environment.

Billions, Brillance and Emergency Board Meetings: The Cisco Webex Board Brings it all to Life